Home  > RESOURCES  > Knowledge Base  >  What does it mean to deep cycle a battery?

What does it mean to deep cycle a battery?

Although “deep cycle” works as a verb in this question, it is usually a phrase for a specific kind of batteries that are designed to supply power continuously at the same level of performance until the battery is thoroughly discharged and then recharged for the cycling. It is usually used to power RVs, electric vehicles, solar grids and so on.

Deep cycle a battery means deeply discharge a battery so as to utilize most of its capacity, which is in comparison with the case of Starter batteries, such as jump starter and “cranking” automotive batteries when the battery capacity is partly delivered in the form of a momentary high-current burst to start the vehicle’s engine.

One thing that differentiate the deep cycle battery and the regular battery is the recharging feature, or repeated cycling. The charge and discharge cycles are a main consideration for the battery choice, besides the chemistry and capacity of the battery. The inverse correlation between the battery’s depth of discharge (DOD) and the number of average discharge cycles at 50% DOD makes it the best option for storage and cost ratio.

When it comes to the chemistry, Lithium ion is a preferred one compared with lead acid battery cells due to its lightweight, fast charges and longer service time. Although lead-acid battery is less expensive than the Lithium ion battery, the performance is inferior as well. More details are listed below. 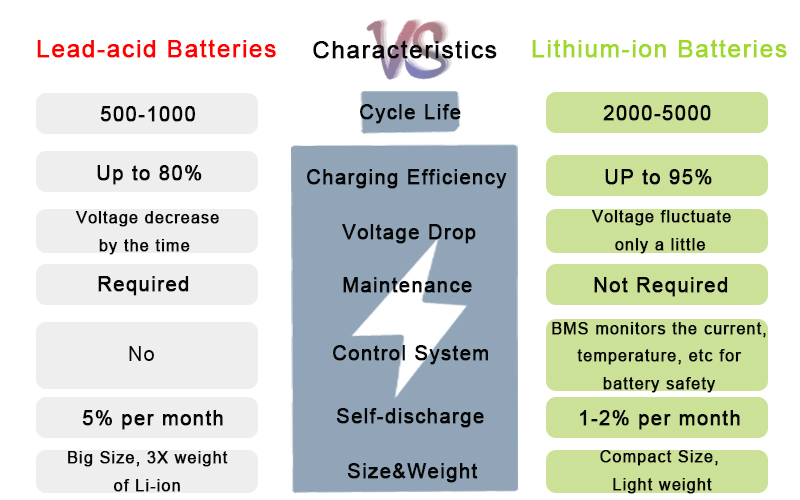 If you are looking for a deep cycle battery producing steady power output over an extended period of time, discharging the battery significantly, at which point it must be recharged to complete the cycle, lithium ion battery is no doubt a more economical choice. This is because it suits the needs of continuous power supply, and battery management system is applied to protect the battery and prolong its life cycle.