According to different application scenario, there are three main types of solar energy systems: off-grid, grid-hybrid and grid-tied. It really comes down to the customer’s current energy supply and each type has strengths that determine how suited they are to your needs.

An off-grid residential system is completely disconnected from the traditional electric power grid, which is good for customers that cannot connect to the grid easily. It is used in remote areas, no power areas, island, communication base station, street light and other application fields that away from grid or it can power things such as boats, caravans, and RVs where mobility is required. The system consists of solar array, solar controller, inverter, storage battery bank and some other components.

The operation mode of off grid system is “using while storing energy” or “storing energy before using”. Without a connection to the utility grid, batteries are essential to balance periods of excess production and excess demand.

The solar array converts solar energy into electricity during the daylight, and supplies power to the load through the controller and inverter and charges the battery meanwhile. When your solar system is not working (night time or cloudy days), your appliances will draw power from the storage batteries. To protect against shortfalls of power when the solar system is under-producing and the batteries are discharged, you also will most likely want to have a back-up generator just in case your renewable sources are not enough at times to keep the batteries charged. The generator is used as a power source during periods of prolonged excess production or unusual demand. The next type of system is a grid-hybrid system, also known as a grid-tied system with battery back-up. Grid-hybrid systems generate power in the same way as an ordinary grid-tie solar system but use special hybrid inverters and batteries to store energy for later use.

With this type of system, more convenience can be brought for power use. Firstly, it allows depletion of stored energy in the battery bank during peak demand periods and lower electricity cost from the grid. Secondly, it enables charging of the batteries using cheap off-peak electricity which is more cost-effective. Thirdly, this grid-hybrid system can operate as a backup power supply. It is ideal for customers who are already on the grid but prone to power outages in their area. Battery based grid-tied systems provide power during an outage and battery can store energy for use in an emergency. Customers are able to back up essential loads such as lighting and appliances when the power is out. 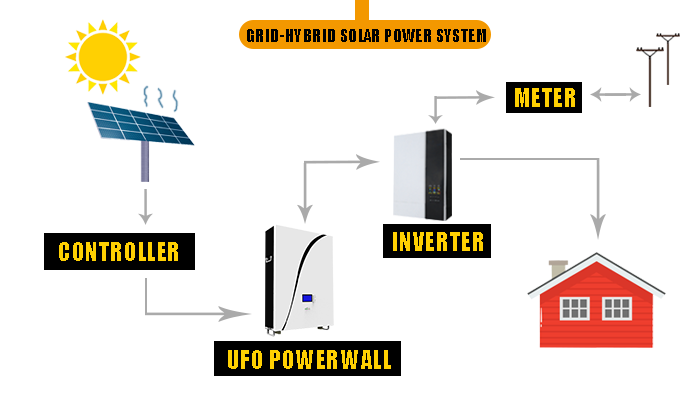 A on grid system or grid-tied system is a common solar system. This type of system, which is connected to the public electricity grid, does not need batteries and uses a standard grid-tied inverter. Any excess solar power that generate by the system is exported to the electricity grid. The main objective of a grid-tied system is to reduce the carbon footprint and benefit from solar incentives. Because of safety reasons, when there is breakout of power system, so does your system. Linemen who work on the power lines have to know that there is no power to the grid. If the solar inverter was still feeding electricity into a damaged grid it would risk the safety of the people repairing the faults in the network. Therefore, when grid-connected inverters do not sense the grid, they will automatically disconnect. It means that power cannot be provided during a blackout or emergency, and you can't store energy for later use. Customers have no control of power that used from the system, such as during peak demand period. However, grid-tied systems with battery storage are able to automatically isolate from the grid and continue to supply some power during a blackout.

But if a customer has a basic grid-tied system, they still have the oppotunity if they want to add storage later. Batteries are able to be added to on-grid systems if required. The solution is doing an AC-coupled system where the original grid tied inverter is coupled with a battery back-up inverter. The UFO Powerwall battery is a great solution for customers who want to install solar now to take advantage of incentives, but aren’t ready to invest in the batteries just yet. 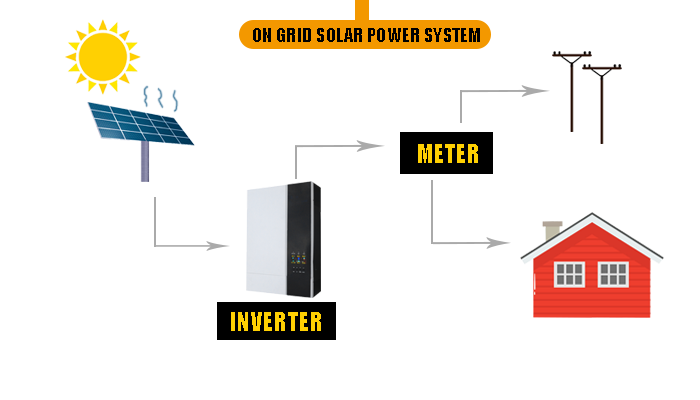