Demand for lithium, one of the key materials used in making lithium ion batteries, is rising rapidly. The metal is used in a wide variety of industrial applications including glass, ceramics and greases, but it’s the use of lithium as a key component in the batteries that power electric and hybrid electric vehicles that has so excited markets.

Lithium does not occur naturally in nature. Instead it is found in a variety of mineral salts which needs to be chemically processed to form the lithium compounds and chemicals required by industry. A number of lithium compounds are used by industry but it is lithium carbonate that is the most commonly used form of lithium, accounting for more than half of total demand. The lithium industry often expresses lithium production and trade in lithium carbonate equivalent (LCE) units.

If electric vehicles, which rely wholly or partly on electricity stored in batteries as their source of energy, revolutionize road transport in the way many expect, demand for the metal will rise exponentially. China will be at the forefront of this.

China is already the world’s largest market for EVs, accounting for nearly half of global sales last year. This trend is expected to continue, supported by government policies driving the development and adoption of electric vehicles. This will require a significant increase in both lithium carbonate and increasingly lithium hydroxide, another lithium compound, which is the preferred basis for the next generation of lithium battery technologies.

China accounted for slightly more than half of total global production last year producing 123,000 tons LCE, according to statistics from the China Nonferrous Metals Industry Association (CNMIA). Of this, 83,000 tons was lithium carbonate with the remainder comprising other compounds like lithium hydroxide, lithium chloride and lithium metal.

Strong lithium demand over the last few years has seen high-cost Chinese producers using imported spodumene set the marginal price. This has been reflected in the average price of imported lithium carbonate, which has more than doubled over the past year and a half, according to customs data. The price of battery-grade material is even higher, with S&P Global Platts assessing battery-grade lithium carbonate CIF North Asia at $17,250/mt in early June.

With demand continuing to outstrip supply and prices holding at elevated levels, imports remained strong in the first quarter of this year, rising 13% on the same period in 2017.

In a bid to secure future supplies Chinese companies have therefore been looking overseas. China’s Tianqi Lithium controls 51% of Talison Lithium, the world’s largest spodumene producer, most of which is shipped to China. And in May Tianqi Lithium also bought 24% of Chile’s SQM, the world’s lowest-cost lithium producer. This should support continuing imports of lithium carbonate into China even whilst a number of new Australian spodumene projects come online. 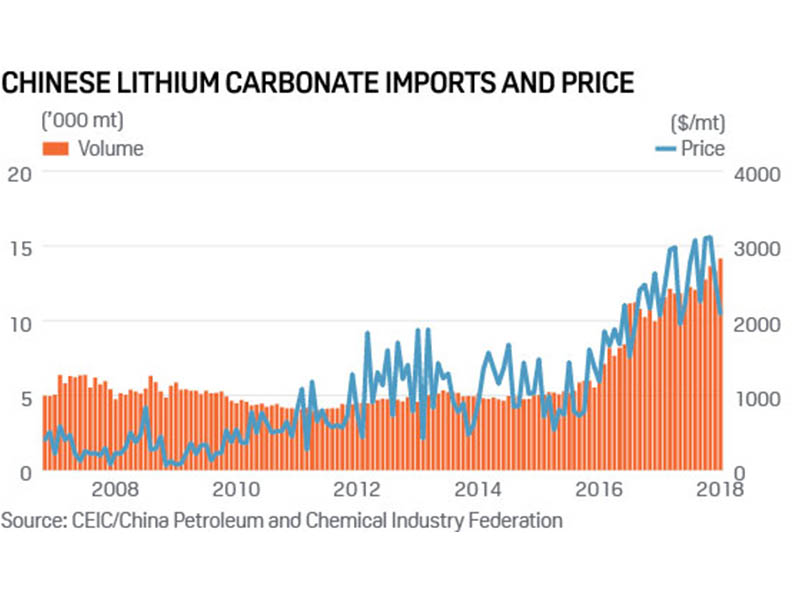 One unique feature of the Chinese electric vehicle market is the popularity of battery (BEV) and plug-in hybrid (PHEV) electric buses. Due to city governments favoring cleaner battery technologies over diesel engines, EV buses last year accounted for over 20% of total sales of buses in China. This contrasts markedly with passenger BEV and PHEV volumes, which although much higher in absolute terms, accounted for under 2.5% of total car sales. 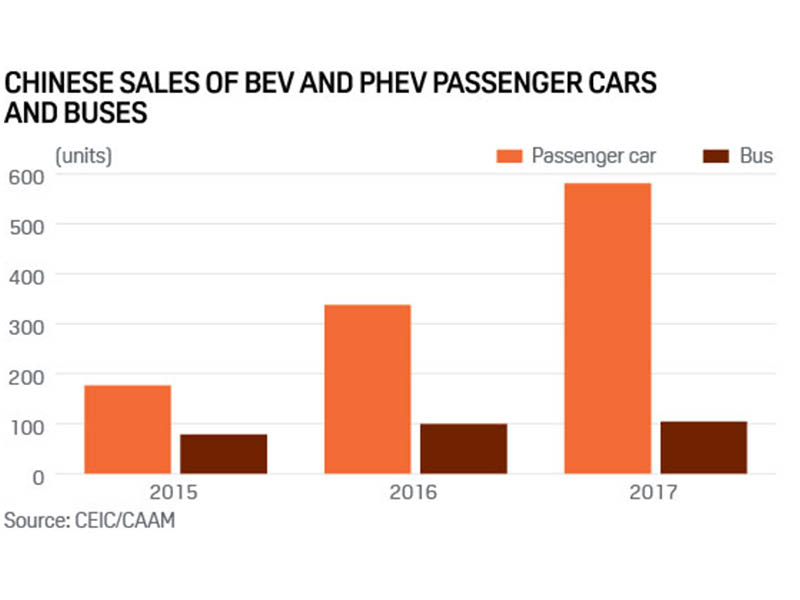 A new policy introduced this year to promote development and production of EVs is expected to change the landscape for EVs in China. Though ambitious, it could see annual EV sales reach 7 million units by 2025, accounting for 20% of new passenger car sales.

LITHIUM WILL BE A KEY COMPONENT OF BATTERIES FOR MANY YEARS

This increase in battery production will see a significant rise in demand for metals like cobalt, nickel and lithium. Lithium carbonate is currently the predominant form of the metal used by battery makers in China, where it is used in the LFP (lithium-iron-phosphate) batteries that are commonly used by Chinese vehicle manufacturers including BYD, FAW-Volkswagen, Geely and Great Wall Motors.

Newer battery technologies like NCA (nickel-cobalt-aluminum) and NMC (nickel-manganese-cobalt) produce more energy for their size than LFP technology, but are more expensive owing to the use of nickel and cobalt. Regardless of the battery technology and the amount and proportions of other metals, the lithium intensity of batteries — the amount of lithium used per unit of energy the battery produces — remains more or less the same. While lithium intensity is expected to decline slightly over the next decade, this will be offset by a shift to larger battery packs to give EVs the range that consumers demand.

The next generation of NCA and NMC 811 batteries, which use eight parts nickel to one part each of manganese and cobalt, will favor the use of lithium hydroxide. However, it is likely that LFP batteries will continue to be used in China. LFP batteries do not provide as much energy as an NCA or NMC battery of the same weight, but in addition to being cheaper to produce they have a higher thermal stability, making them safer. NCA batteries in particular can be unstable and prone to overheating, causing fires. LFP batteries are therefore likely to continue to be used in China, especially in vehicles like electric buses where safety is of paramount importance.

The battery packs used in BEV and PHEV buses are on average much larger than those found in passenger cars, which means that they have been a significant driver of lithium demand. Indeed, S&P Global Platts estimates that in 2017 buses accounted for around 45% of all lithium demand from the Chinese EV sector. 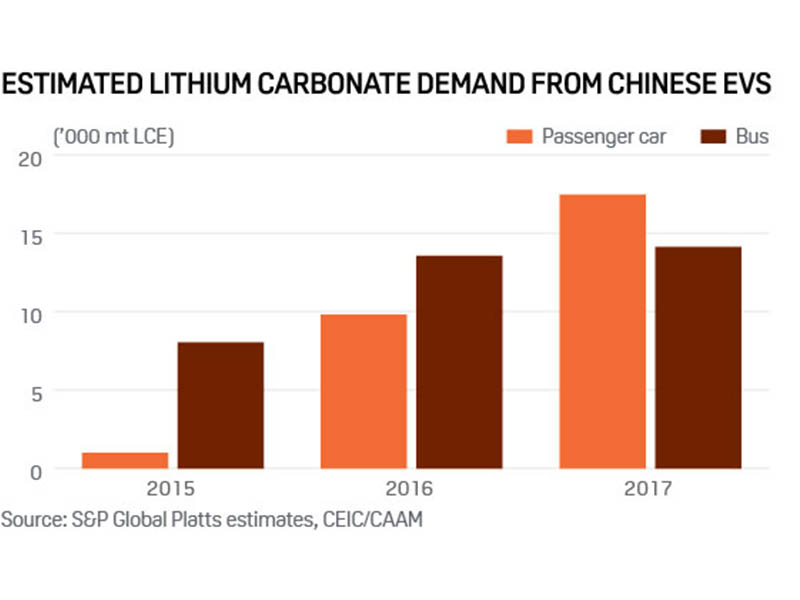 Given the government’s desire to reduce air pollution and develop China as a leader in EV technology, we think that commercial vehicles, and buses in particular, will continue to be significant driver of EV penetration in China in the years ahead.