Home  > RESOURCES  > Knowledge Base  >  How do lithium-ion batteries work?

How do lithium-ion batteries work?

As a battery, it delivers its mission which is power to go. It gives us all the conveniences of electricity in a handy, portable form. The only trouble is, most batteries run flat very quickly and cannot be recharged, then billions of disposable batteries were thrown away year by year and it is bad for our environment. Fortunately, rechargeable batteries help to solve this problem and the best kind of battery is called lithium-ion. Do you remember the periodic table of elements like a mantra?

Let’s take a closer look at this type of rechargeable battery.

What is lithium-ion battery? What is its features？

A lithium-ion battery is a type of rechargeable battery. It is composed of:

1) the anode and the cathode;

2) a separator between the two electrodes;

3) an electrolyte that fills the remaining space of the battery.

The anode and cathode are capable of storing lithium ions. By lithium ions moving between the negative (anode) and positive (cathode) electrodes through the electrolyte, the batteries can be charged and discharged.

Because of its high energy density, lithium-ion batteries are suitable for storing high-capacity power with a light weight than other batteries. These rechargeable batteries are extremely versatile and suitable for the use in many different types of electronic devices from laptops to cars like golf carts, camper van. In addition, as an environmentally friendly technology, the long -life, temperature resistance, and safety features given by the recharge ability of this battery also allows it become growing popular in solar power battery storage, communication base station, etc.

Let’s keep it simple. Batteries store and releases energy by moving electrons from one “end” of the battery to the other. In the batteries, the electrolyte is a salt solution that contains lithium ions—hence the name.

Lithium-ion travel between the negative (anode) and positive (cathode) electrode through an electrolyte. 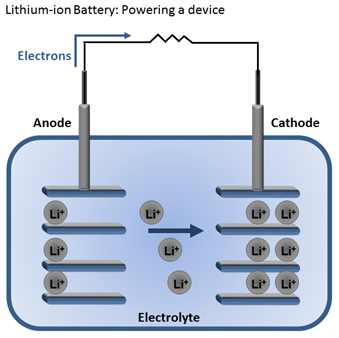 How a lithium-ion battery produces electricity 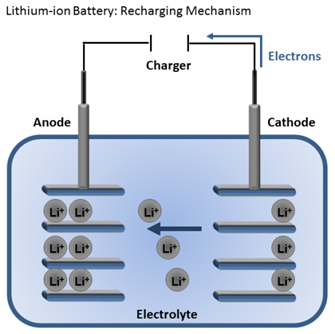 The movement of ions (through the electrolyte) and electrons (around the external circuit) are interconnected processes, and if either stops so does the other. If ions stop moving through the electrolyte because the battery completely discharges, electrons can't move through the outer circuit either—so you lose your power. Similarly, if you switch off whatever the battery is powering, the flow of electrons stops and so does the flow of ions. The battery essentially stops discharging at a high rate (but it does keep on discharging, at a very slow rate, even with the appliance disconnected).

Unlike simpler batteries, lithium-ion ones have built in electronic controllers that regulate how they charge and discharge. They prevent the overcharging and overheating that can cause lithium-ion batteries to explode in some circumstances.

Do all lithium-ion batteries have the same performance?

Lithium-ion batteries are divided into various kinds according to size, form, the material used for the positive and negative electrodes, and so on.