Lithium-ion batteries lose their juice over time, causing scientists and engineers to work hard to understand that process in detail. Now, scientists at the Department of Energy’s SLAC National Accelerator Laboratory have combined sophisticated machine learning algorithms with X-ray tomography data to produce a detailed picture of how one battery component, the cathode, degrades with use.

The new study, published this month in Nature Communications, focused on how to better visualize what’s going on in cathodes made of nickel-manganese-cobalt, or NMC. In these cathodes, NMC particles are held together by a conductive carbon matrix, and researchers have speculated that one cause of performance decline could be particles breaking away from that matrix. The team’s goal was to combine cutting-edge capabilities at SLAC’s Stanford Synchrotron Radiation Lightsource (SSRL) and the European Synchrotron Radiation Facility (ESRF) to develop a comprehensive picture of how NMC particles break apart and break away from the matrix and how that might contribute to performance losses. 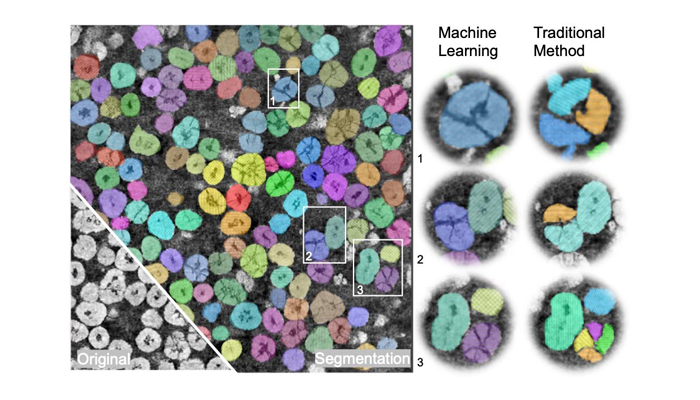 Of course, it’s a tall order for humans to figure out what’s going on just by looking at pictures of an NMC cathode, so the team turned to computer vision, a subfield of machine learning algorithms originally designed to scan images or videos and identify and track objects like dogs or cars.

Even then, there were challenges. Computer vision algorithms often zero in on boundaries defined by light or dark lines, so they’d have a hard time differentiating between several small NMC particles stuck together and a single large but partially fractured one; to most computer vision systems, those fractures would look like clean breaks.

To address that problem, the team used a type of algorithm set up to deal with hierarchical objects – for example, a jigsaw puzzle, which we would think of as a complete entity even though it’s made up of many individual pieces. With input and judgments from the researchers themselves, they trained this algorithm to distinguish different kinds of particles and thus develop a three-dimensional picture of how NMC particles, whether large or small, fractured or not, break away from the cathode.

They discovered that particles detaching from the carbon matrix really do contribute significantly to a battery’s decline, at least under conditions one would typically see in consumer electronics, such as smart phones.

Second, while large NMC particles are more likely to become damaged and break away, quite a few smaller particles break away, too, and overall, there’s more variation in the way small particles behave, said Yijin Liu, a staff scientist at SLAC and a senior author of the new paper. That’s important because researchers had generally assumed that by making battery particles smaller, they could make longer-lasting batteries – something the new study suggests might not be so straightforward, Liu said.

SSRL is a DOE Office of Science user facility. Additional authors include researchers from the Howard Hughes Medical Institute, the European Synchrotron Radiation Facility, Virginia Polytechnic Institute and State University, the Chinese Academy of Sciences and Purdue University. The research at SLAC was supported by the DOE Office of Science.
Source: https://scitechdaily.com/scientists-use-artificial-intelligence-and-computer-vision-to-study-lithium-ion-batteries/